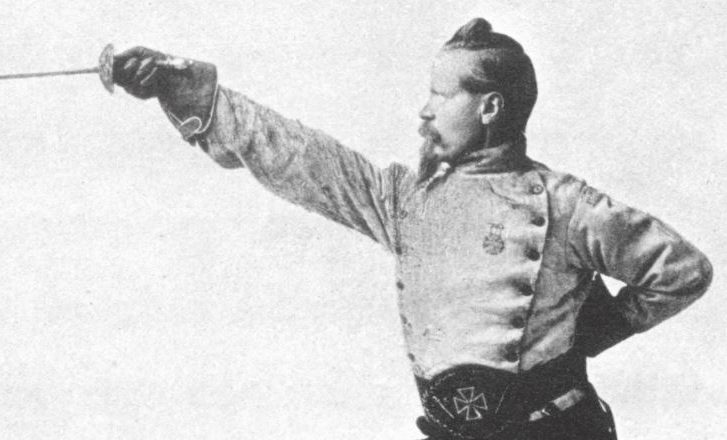 One of the good things about sheltering in place is the amount of reading you can get done. And when I am not practicing the online footwork drills or thinking about getting to fence again someday, I am reading about fencing, both historical and modern sport. There are a lot of great books on the topic, but the one I would like to discuss today is “Self Defense for Gentlemen and Ladies” by Colonel Thomas Hoyer Monstery of the late 19th century.

The book is in two parts. In the first part, the editor gives a biography of Col. Monstery. Upon reading it, my first thought was how did we not make a movie about him. He really seemed to be that guy – Boxer, fencer, and soldier of fortune. Winner of prize fights and duels. And instructor of boxing, fencing, single stick, cane, and quarterstaff. He trained many notable figures of the time: actors Francis Wilson and the two brothers Junius Brutus and Edwin Booth (but notably not the most notorious brother John Wilkes), and noted 19th century female fencer Ella Hattan, known by her stage name as La Jaguarina.

An interesting note is that Monstery advocated women taking up fencing before it was socially acceptable for them to do so. He stated that it “makes a woman active-quick to see; gives her command of her limbs. Enables her to move quickly and with certainty…It brings color to her cheek, elasticity to her limbs, and adds rears to her life.” He also mentions that female fencers “are superior to gentlemen in many respects. They surpass the male pupils in quickness, in determination, and the peculiar kind of endurance and nerve-forces required.” This is an attitude that I understand was rare in the 19th century, when women were “the weaker” sex, and is in stark contrast to a more recent statement by Daily Wire commentator Andrew Klavan where he said, “No woman can fight with a sword. Zero women can fight with a sword.” I would like to arrange for this guy to meet up with Coach Lisa or Coach Karen in some back alley.

The second part of the book reproduces a series of articles published in the Times regarding different forms of self-defense. In the series, he publishes rules for fencing and boxing competitions while criticizing the ones that existed at that time. He also gives different styles (boxing, fencing, cane etc.) their own section, and is a great read for anyone interested in Victorian era martial arts.

But the introduction here written to the series was my favorite part, and the true reason for this blog entry. In it he extolls fencing as the very best form of physical fitness. He starts by a brief review of the history of mankind, and how with civilization we tend to become increasingly lacking in good fitness. He then talks about what constitutes good exercise and gives his reasons why he feels fencing is the best.

He mentions no exercise is good for the body unless it engages the mind. The idea is that exercise for exercise sake will tire the muscles but is difficult to keep up with. Conversely, engaging your mind can make you forget fatigue, making you more enthusiastic, and giving you the feeling of “I can’t wait to get back to this”.

Col. Monstery also states that fencing is an exercise that uses every muscle in the body “as God meant they should be used”. In other words, a good total body workout. From my own personal experience, I can attest that good fencing encourages good posture, as well as working the legs, arms and shoulders. After a good night of open bouting, I am sore all over and thoroughly exhausted.

His whole reasoning for the superiority is too much to relate here, but it does make an interesting read. In my heart I must agree with him in that fencing is in fact the best exercise. To quote the good Colonel, “He who lives by the sword, lives longer.”