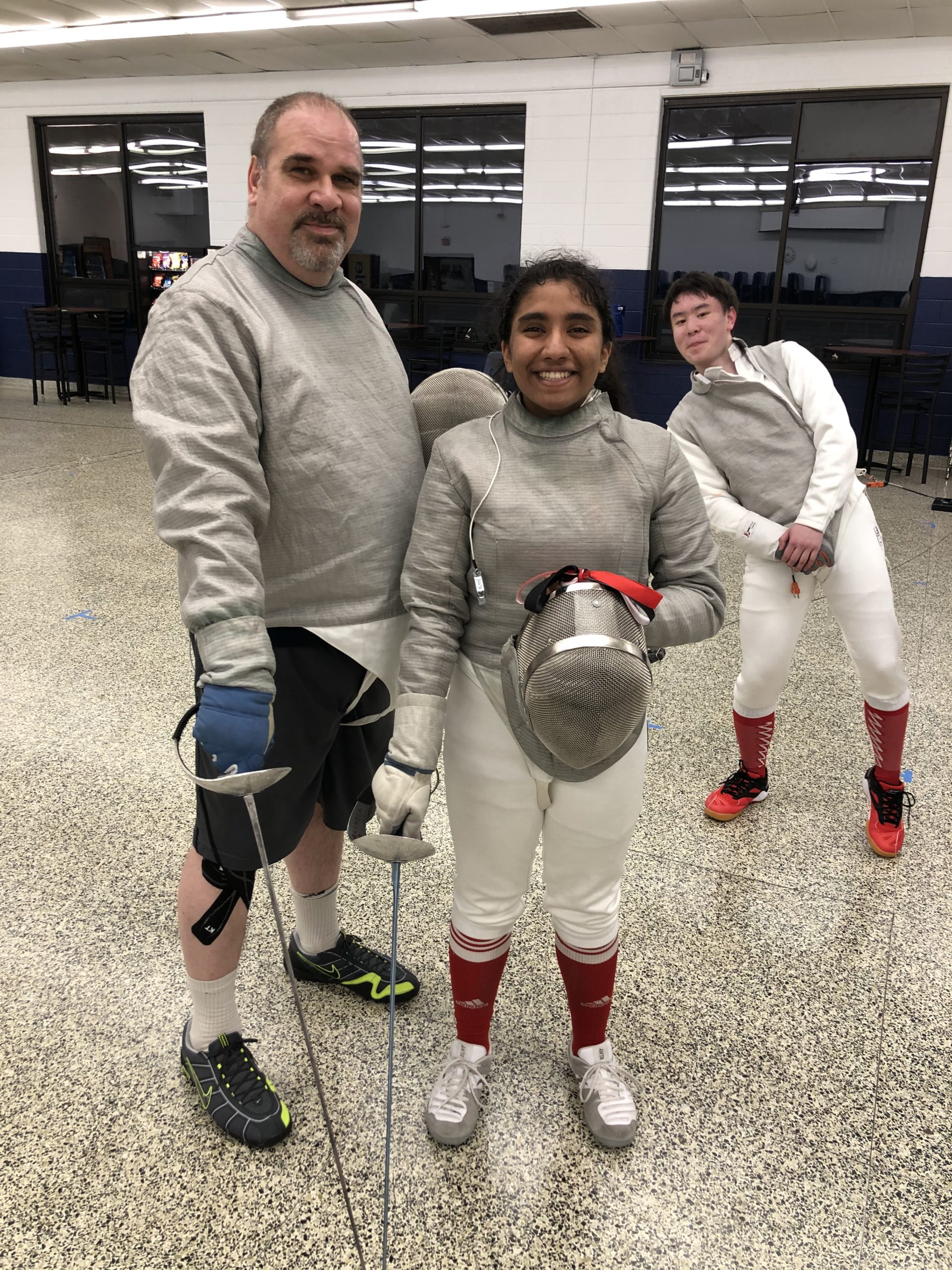 It would be easy to say I fence because I love it and leave it at that, but it really goes deeper than that. Even though I only started learning the sabre last year, my love affair with fencing began when I was very young. Although they were not the movies of my generation, I couldn’t get enough of movies like “The Adventures of Robin Hood”, “The Three Musketeers”, and “Scaramouche” on TV when the networks chose to put them on. Some people may disagree and say, “That’s not real fencing!”, but I would disagree. Such actors as Basil Rathbone were trained fencers, and even though the scenes were choreographed, it would be impossible to have such extended action sequences without being competent with a sword (as opposed to films today which make frequent use of the cutaway).  In addition, in some recess of my mind, when I am advancing down the strip, I am D’Artagnan driving back some captain of the Cardinal’s Guard. But I digress.

All of this was just a dream until last year, when my wife gave me fencing lessons for Valentine’s Day. I was so excited! I was so excited, I did not even balk at the classes I had to get through before I could even get my hands on a sabre. One year later I am still at it. I have done two competitions, and I fence every chance I get. Now when people ask why I fence and why I love it, the breaks down into the following:

Fencing is a community – Not only is it a community, but it is a community of ladies and gentlemen! Who wouldn’t want to be part of a community like that? Forte has always been very open and welcoming. When I go in, I am not “that old guy who fences”, but rather I am just another fencer. I have formed great connections with coaches, parents, and younger fencers that I would not give up for anything. And I have greatly enjoyed going out and cheering on the high school fencers from Forte in scholastic competition.

To Be an Example – This may seem a little silly, but I would like to be an example to the young and old alike. To the older folks, I would like them to see me and say, “He started in his 50’s, maybe I should try it”. I believe that you are never too old to start something new. Not only that, I believe that it is good for you. And fencing is a great way to keep active. And for the younger fencers, I want them to see me think that they don’t have to give up fencing when they leave school and join “the real world”. It is a great way to stay active, and when they become parents, it is an experience they can share with their children.

To Stay Active – If I haven’t said it before, fencing is a great way to stay active. Not just physically but mentally as well. I have heard it said that fencing is chess at the speed of boxing, and there is truth in that statement. And the mind is a muscle of sorts, it needs exercise just as much as the body. Fencing is a true mind and body sport.

These are my reasons, and I hope that they resonate with other people out there. The past years of fencing have been great for me, and I look forward to my continued journey.