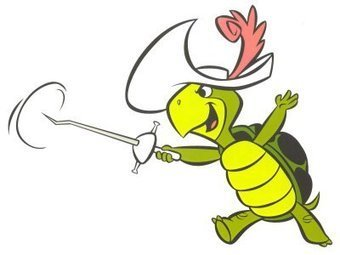 Just like my first varsity match, the next few meets were pretty nerve-racking. I still had not gotten used to the pressure of varsity matches when one of our starters was out sick. So, I was asked to sub in. This happened a couple of times, and the more I was put on the strip, the more the nervousness slowly became less and less noticeable. I started to get the hang of bouting against good opponents and started experimenting with new things instead of trying to fence for my life. Going on the strip became much more enjoyable because I wasn’t worried about losing.

Now that I had gotten used to the varsity level, I wanted to expand my horizons. This is where I developed a strange attachment to trying to flick my opponents. Flicking is the action where the fencer causes the blade to bend to hit a target area that would be impossible to hit with a straight blade. Flicking is good for getting around parries and is a good option as a riposte. It sounds cool, looks cool, and feels cool to do. I may have to do extra push-ups at the end of practice for missing my flicks, but I still have a ton of fun doing them.

Fencing on the varsity strip has given me a lot more time to practice my technique. Which mostly consisted of marching down the strip with priority and waiting for an opportunity to attack. My advances would be incredibly slow and my steps incredibly small, but I would do this to build up a rhythm to my advance. Once my opponent goes for an attack, I would purposely catch his or her blade with my body and drive my blade into his or her target. This way, once he or she sticks out their blade for an attack, I would cause a moment where my opponent could not parry my attack because theirs was stuck on my lamé. I did this to secure a few points and then once a lead was established, I would start to try out new things. I would always practice circle 6 flick to the shoulder or to flank or a fleche disengage. Being on the strip has just given me a lot more time to hone my technique and to try out some new things.